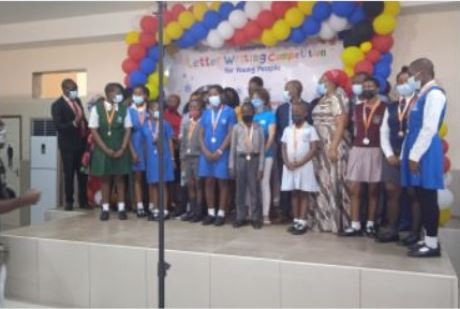 Macmillan Education Eswatini donated books worth E20 000 to a sensational national letter writing campaign that quenched the thirst of over a thousand young minds. These books were awarded to 12 winning participants, as well as two schools that participated in the letter-writing competition.

This activity was spearheaded by Eswatini Communications Commission (ESCCOM), a government parastatal that regulates communication in the country, and whose affiliates include companies like MTN Eswatini and Eswatini Mobile, as well Eswatini Post and Telecommunication Commission. Just like Macmillan, ESCCOM believes in the value of education as an important instrument towards nation building: hence the partnership in the letter-writing competition. Other partners included World Vision, a child-centred non-governmental American organisation, UNICEF, and the Ministry of Education. The competition had two main categories: the 9-12 and 13-18-year-olds writing in SiSwati, as well as the 9-12 and 13-18-year-olds writing in English. Despite schools being closed during the writing stage of the competition, the response was quite overwhelming, as more than 1,000 letters were received for the National Letter Writing Competition from students across Eswatini.

Launched on the 8th of October at the Happy Valley Hotel in Zulwini by the Principal Secretary in the Ministry of ICT, Mr Maxwell Masuku, the competition was themed: “Write a letter to a friend or family member about your experience with Covid-19”, in recognition of the global pandemic.

The main objective of the competition was to improve literacy through the art of letter writing, targeted at children and young people. The competition encouraged participants to express their creativity; it was also meant to assist students to improve their language skills. Even though the youth are rapidly embracing technology, there is still a need for the traditional forms of communication for young people who might not have access to the internet – the backbone of digitalisation.

The prize presentation for the national winners was held on Monday the 29th of November, at Esibayeni Lodge, where Senamile Maziya from St Anne’s High School and Zachary Musademba from Ka-Zakhali Private School emerged champions.  They were awarded Macmillan book packs as well as laptops by UNICEF. Schools with the highest entries were St Theresa’s Primary and St Michael’s High School and they were also awarded 3

boxes of Macmillan books each to promote reading at the school level.

Macmillan Education Eswatini’s participation benefitted us tremendously in terms of mileage and creating brand awareness – we got media coverage, branded indoors and outdoors, got a chance to market our digital products and even got the Principal Secretary’s praises. Mr Bheki Gama, the Ministry of Education’s Principal Secretary emphasised: “Partners such as Macmillan Education make learning easier in the country, due to their consistency and commitment to advancing learning in our schools.” Mr Sibusiso Simelane, Macmillan’s publishing manager assured all participants of Macmillan’s unwavering support for such eye-opening activities, particularly in our schools. This event was quite epic and very much worth our donation and attendance.