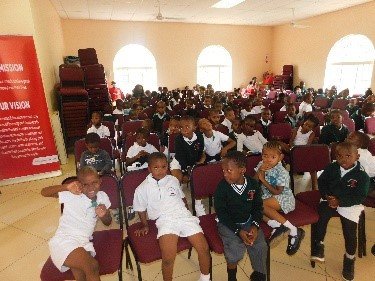 International Mother Language  Day recognises the fact that languages and multilingualism can advance inclusion, and the Sustainable Development Goals’ focus on leaving no one behind. Like UNESCO, Macmillan Education believes in observing every child’s right to know (and use) mother tongue as early as early childhood stage. In line with this Macmillan Education Eswatini partnered with 5 pre-schools from Ezulwini on the 18th of February 2022 to celebrate Mother Tongue. The theme for 2022 was: Using technology for multilingual learning: challenges and opportunities.

During the proceedings of the ceremony various activities were rendered by each of the 5 pre-schools. These renditions included naming of cultural items using SiSwati, counting in their mother language, reciting days of the week in their mother language, reciting poems, singing songs and more, just to unearth and emphasise the beauty of the kids’ mother tongue. The managing director for Macmillan Education Eswatini, Mr Bongani Motsa, highlighted that as a company we note that research indicates that having a strong mother tongue foundation leads to a much better understanding of the curriculum as well as a more positive attitude towards school, so it's vital that children learn their first language before they may be introduced to a different language. He further stated that the promotion of the mother language and multilingualism can advance inclusion and ensure that no one is left behind in socio-economic development terms. This event attracted a lot of mileage for the company.

Macmillan Education Made a Donation!